City Centre is located near Town Hall. It's surprising to see how dilapidated it's become inside. I only saw one or two shops open, and they didn't look like they had much business!

Chinatown Monorail Station is located in Number One Dixon shopping centre. There's not a lot going on in this shopping centre anymore. I saw a small space up for rent right next to the abandoned station at about $250 per week.

Harbourside Station is attached to Darling Harbour's Harbourside Shopping Centre. I think Harbourside is still awesome and it's managed to keep its charm. There are plans for its renovation, though I am anticipating a bright future for the centre (or at least I'm hoping for it!). Of course, they'll be taking the monorail station down with the centre when it's demolished, so I tried my best to get as many shots as I could of the station while it still stands. Fortunately, there are plenty of good vantage points for this station.

Darling Park station is located at the east end of Pyrmont Bridge. Unfortunately, this station was securely boarded up (I'm talking a fence, hoardings, closed shutters and another wall of hoardings!). Also, it smelled like someone had gone potty in there...

I thought it was cute to see this kind 'nod-of-the-head' to the brief life of the Sydney Monorail at the articulating section of the Pyrmont Bridge. I haven't seen anything else around that acknowledges that the monorail ever existed (bar the abandoned stations). Let me know if you know of any other examples of this type of thing around the CBD.

I hear that the Powerhouse Museum purchased a monorail cabin and a section of track, but they don't have it on display - it's in storage.

Popular posts from this blog 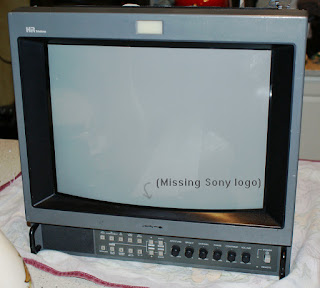 Just popped the cover off my Sony PVM 1454QM RGB video monitor. Have had it for a few years, and it's always worked perfectly well - just took it apart for a second time to check more carefully for any obviously bulgy caps. It seems that these monitors (or at least their picture tubes) were manufactured in Ichinomiya in Aichi Prefecture, Japan . Apparently mine was manufactured in 1996. Mine had a few defects when I got it (missing Sony logo, kind of grubby, dumb calibration settings, base has been hacked apart for some reason - perhaps to fit into some rack mount?), but was overall a pretty good deal at $50, free delivery! Back of the Power Supply PCB The Picture Tube in the Sony PVM 1454QM Flyback Transformer in the PVM 1454QM Deflection Yoke in the PVM 1454QM Anode Cap So all in all, it's a little dusty - but I really love the no-expense-spared modular design! Not entirely sure what's the deal with the paper phenolic board though (FR4 was o
Read more 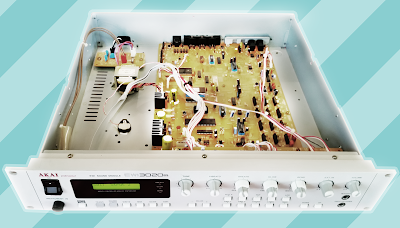 If you've just got your hands on a pre-owned EWI3020m, perhaps from a junk auction, and you switch it on for the first time to hear either nothing at all or perhaps weird bleeps, bloops and funky Atari 2600 special effects in the best of cases, then your problem is likely a dead non-volatile-memory battery . De-Lidded EWI 3020m with Battery Mod Why? When the battery-backed memory loses its power completely, it loses its ability to retain information once system power is switched off. When the power is switched back on, the values of each bit in memory are amplified to restore them to normal logic levels. Having been unpowered for some time, the memory is storing only random noise, so all user data is now corrupted, nonsensical, and out of the typical ranges (hit the MIDI  button on the front panel and check out the RX and TX channel settings - nominal values are numbers 1-16, but corrupted values will exceed far beyond that range and even roll over into special charact
Read more